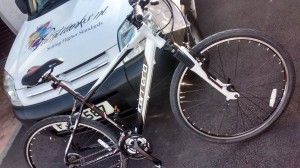 Earlier this month, Gerard was announced as the winner of a competition run by Johnstones stockists in Newtownards, Homestyle Decor. His prize was a Carrera Cossfire hybrid bike, which he decided to give away in a competition of his own.

The competition ran on Facebook; entrants simply had to ‘Like and Share’ the post, and introduce a friend to Paintworks NI, to be in with a chance of winning. The business, already with a large following on the social network, ran the competition as a simple ‘thank you’ for the support from it’s clients and supporters in its first year.

Lucky winner, Fred Rodgers, was announced as the new owner of the bike last week.

“…Can’t believe my luck, it’s my 60th birthday today. Thank you so so much you’ve made my birthday special.”

Congratulations and enjoy your prize, Fred!