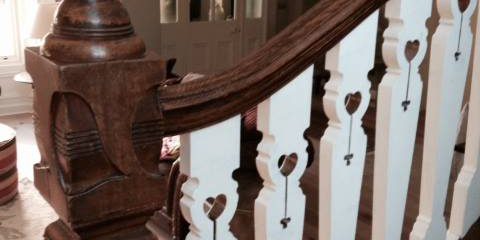 Our Helen’s Bay project focussed on restoring a striking staircase over a hundred years old. The original brief was to strip the Newell posts and banister back to the original grain, stain these, and to paint the spindles and stringer white. A large built-in bookcase was also part of the project – to be painted with acrylic satin to blend in to the surrounding walls.

Paintworks NI converted the enormous staircase into an on-site spray booth using large tarpaulins, plastic and paper sheeting. Once the stripping process began using paint removal gel – solid oak was revealed under years of old stain. At this point, our client decided this was too beautiful a feature to hide away, and the whole staircase, spindles and stringers included, was to be restored to its former glory.

Two hundred and thirty hours were spent stripping and sanding every inch of the staircase before the natural oak stain could be applied. The stain was sprayed and ragged, before applying four coats of lacquer, again by spray application. The end result was phenomenal – a grand old solid oak staircase fully restored to its former grandeur.

“For anyone looking for the most professional, hard-working painters who do things to a different level than I’ve ever seen check out Paintworks NI. The best money I’ve spent on our house restoration bringing a 100 year old staircase back to it’s original glory! Great work guys, such an unbelievable transformation. Amazing to see a bit of history restored with such precision and professionalism!” – Bryn Cunningham